No more marking a printed legal text by hand and watching the marked-up book to become outdated with the next version...

EPC.App is an annotated European Patent Convention (EPC) and PCT.App an annotated Patent Cooperation Treaty (PCT), which allow each user to further annotate them electronically and to receive updates from the authors without losing individual user annotations.

EPC.App /PCT.App are electronic books implemented as a web browser application, which offer for registered users: 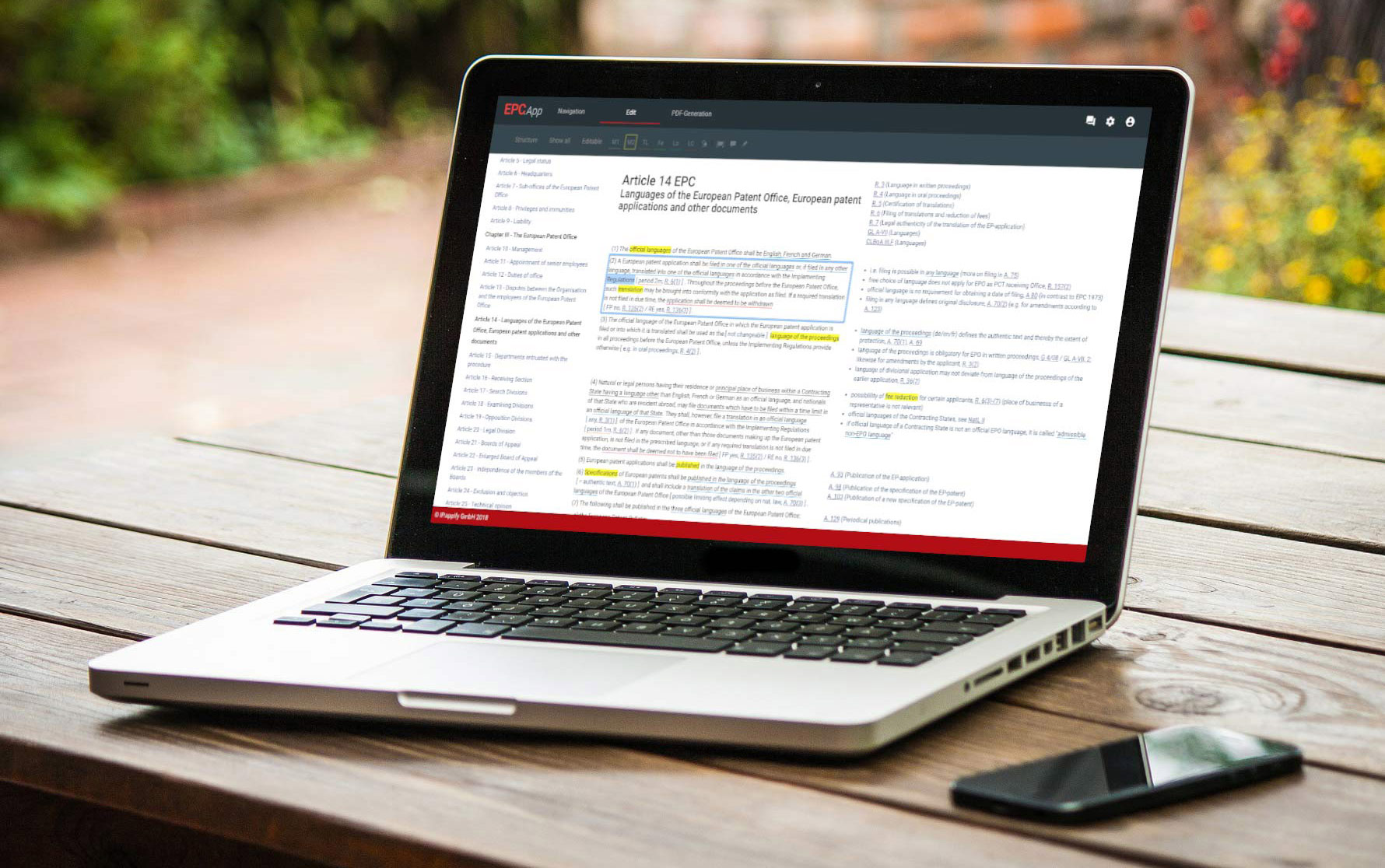 EPC.App and PCT.App are intended for both the Practitioner and the Trainee. They are dedicated to be used when preparing for the European Qualifying Examination (EQE) and for working as a Professional thereafter. 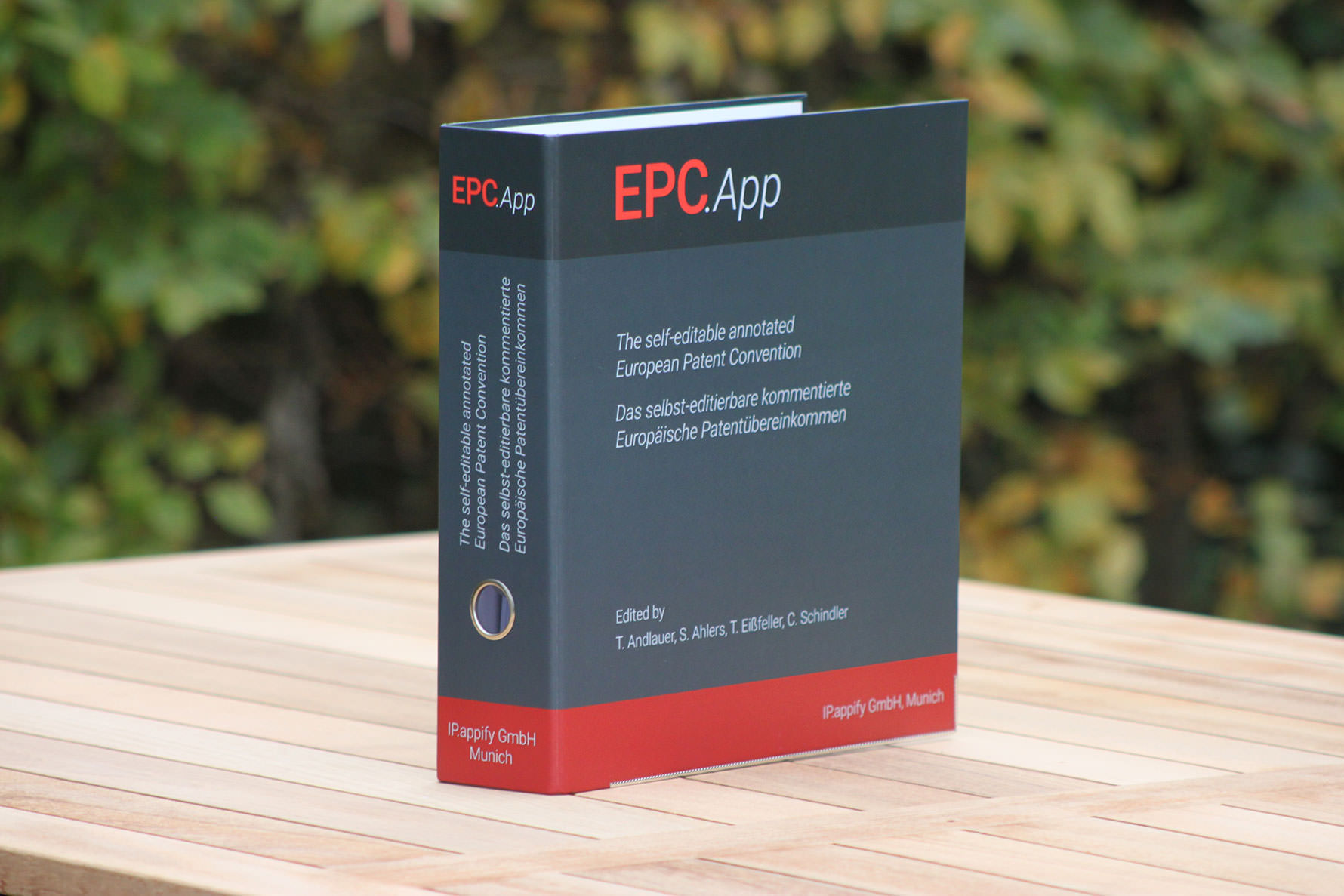 If you are interested in the displayed folder (as long as stocks last), please send an e-mail to support@ipappify.de.

The PCT.App is now updated to legal status of 1st July 2020. Major changes are indicated by blue update notes in the App as explained in the FAQs; a further list of detailed changes can be found here.

In addition to the legal update, the author Pete Pollard has largely revised the book compared to the previous edition, by condensing the content and improving readability while still retaining the characteristic topic-based structure.

We published also the PCT.App September 2020 Edition as stand-alone paperback version on Amazon (www.amazon.co.uk or in your local marketplace). The second version on thin 50g paper for convenient transport is available via boekenbestellen.nl.

Coming soon: A German version of PCT.App is almost complete and to be released in the next weeks.

The EPC.App April 2020 Edition is now available as stand-alone paperback version on Amazon (www.amazon.co.uk or in your local marketplace). All those who start with this classical book and afterwards decide to continue with the electronic version qualify for a discount of 50% on the first annual license of the EPC.App.

The recently enlarged EPC.App database may be used to build your own annotated case law database. This 2-minute video in our youtube channel demonstrates available functions.

If you moreover feel there might be still room to optimize your PCT knowledge, the stand-alone PCT.App paperback is now also available in a thinner version (2.3 cm thick) on 50g bible paper for more convenient transport via boekenbestellen.nl. The content is the same as in the Amazon version (4.1 cm thick) which is on strong 90g paper for heavy usage.

Moreover, the license management has been adapted to allow online license upgrades. Further information can be found here.

If you ordered the PCT.App paperback on Amazon on or before 5th December 2019, you may have received a version with an incorrect index of articles and rules. A corrected version of the index is meanwhile included and can further be downloaded here.

If you are affected and unhappy with sticking the correction into the book, please contact us via support@ipappify.de and we will send you a replacement.

For all those who prefer to start with classical books, we now also published the EPC.App and PCT.App November 2019 Editions as stand-alone paperback versions - both updated to legal status relevant for EQE 2020 - on Amazon (available marketplaces are listed here for EPC.App and here for PCT.App).

Now also the PCT.App November 2019 update is finished. We used this occasion to review and fine-tune the book, taking also early user feedback into account.

As usual, amendments are further indicated by blue update notes in the App as explained in the FAQs.

The EPC.App is now updated to legal status of 1st November 2019 and thereby brought in line with the law in force as relevant for EQE 2020.

This update includes the Official Journal and Supplementary publications until October 2019, amendments to the implementing regulations (Rule 126 EPC), recent BoA case law until October 2019, the 9th edition of the "Case Law of the Boards of Appeal" (July 2019), and the EPO Guidelines for Examination (November 2019 edition), all in accordance with our update policy.